The first winter in a new house is always a great time to celebrate the achievements of the last year, and an opportunity to look back at how much our Pile of Rubble has changed from December 2017 to December 2018.

As winter set in, we still had the final two rooms on our floor to plaster. These rooms had been used to store tools and furniture for most of the year. As we had almost completed the major internal work by the end of October, we decided to hold our first Halloween/house warming party. Up until this point our Pile of Rubble did not have a finished kitchen or small front room. Our Dream Team knew that Halloween was our deadline for the completion of the major works, whilst this was a bitter sweet moment for us as our Pile of Rubble would be 95% complete, it also signalled the end of our working relationship with our Dream Team.

But first we needed to finish the final two rooms, which until now had been used for storage.

The smallest room at the front of the house had been used for all the tools throughout  the entire renovation, and had been lovingly referred to as “The room of Doom” since January. Our Dream Team had begun removing tools no longer needed at the end of September, however we still needed a large selection to finish the two rooms, so we had to find alternative storage places with our Pile of Rubble to house the tool collection.

And so yet another game of tool Tetris began, we had to come up with a solution to the tool storage situation. In the end we decided to leave the main room at the front of the house until after Halloween, and so that became our new “Room of Doom”. 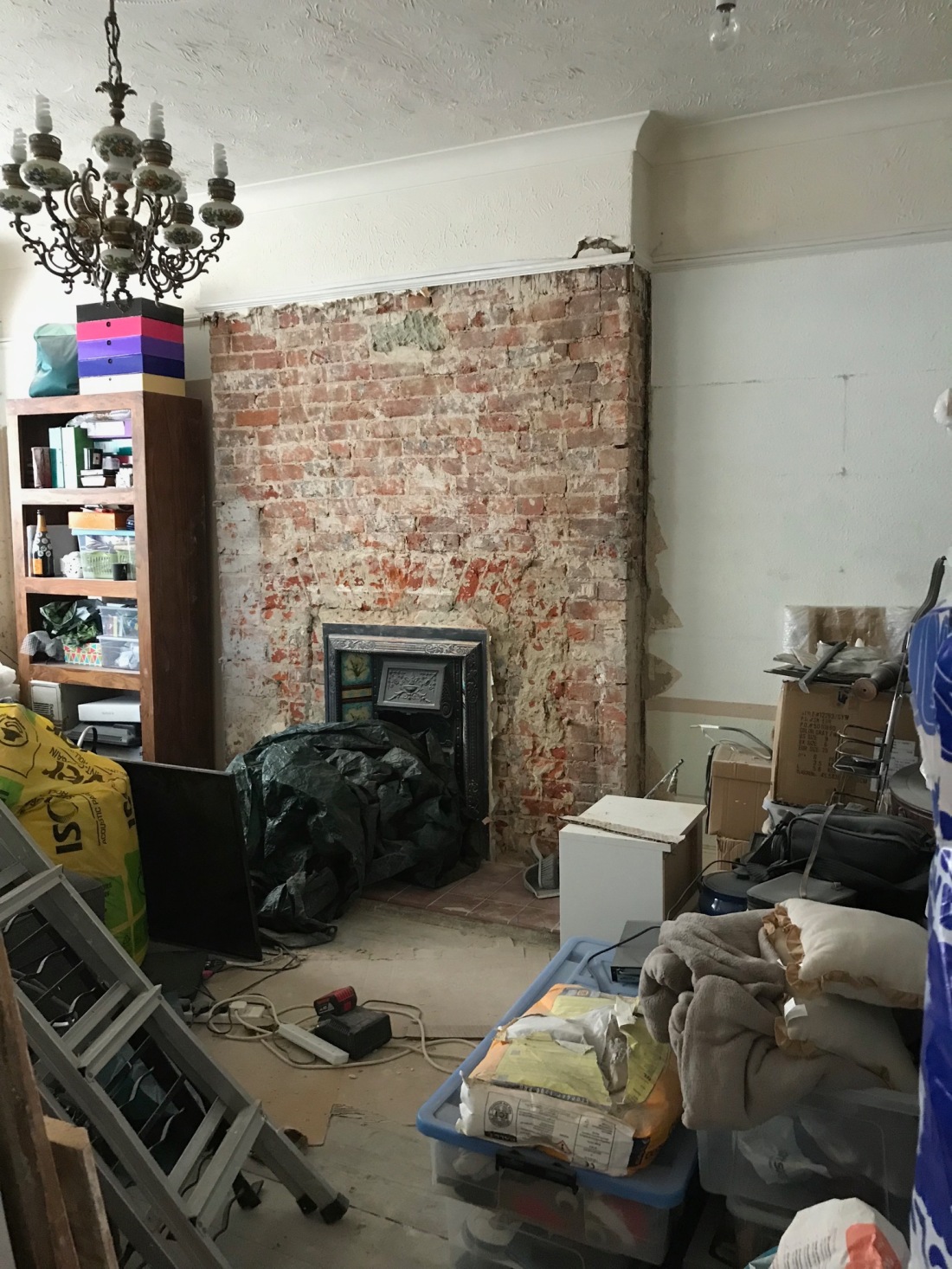 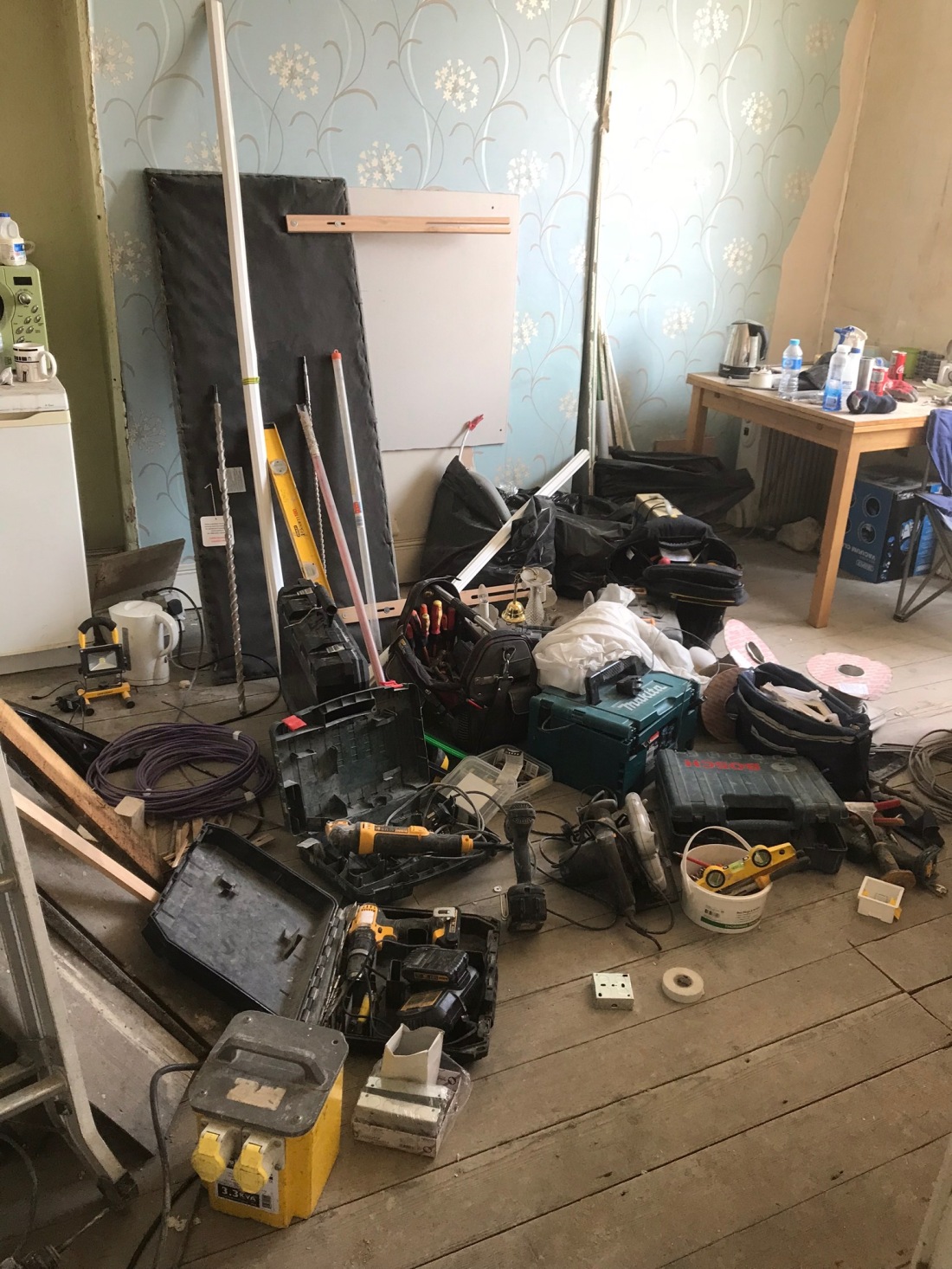 This room had been used for storage as it is easily accessed from the front of our Pile of Rubble, and was not being changed in anyway. The plaster needed to be stripped from the walls, in preparation for stitching, and the wooden lintel under the window needed to be replaced, as over time water had got in around the front window, and the wood was wet and rotten. We also removed all the paster from the fire place, in order to expose the original brickwork. 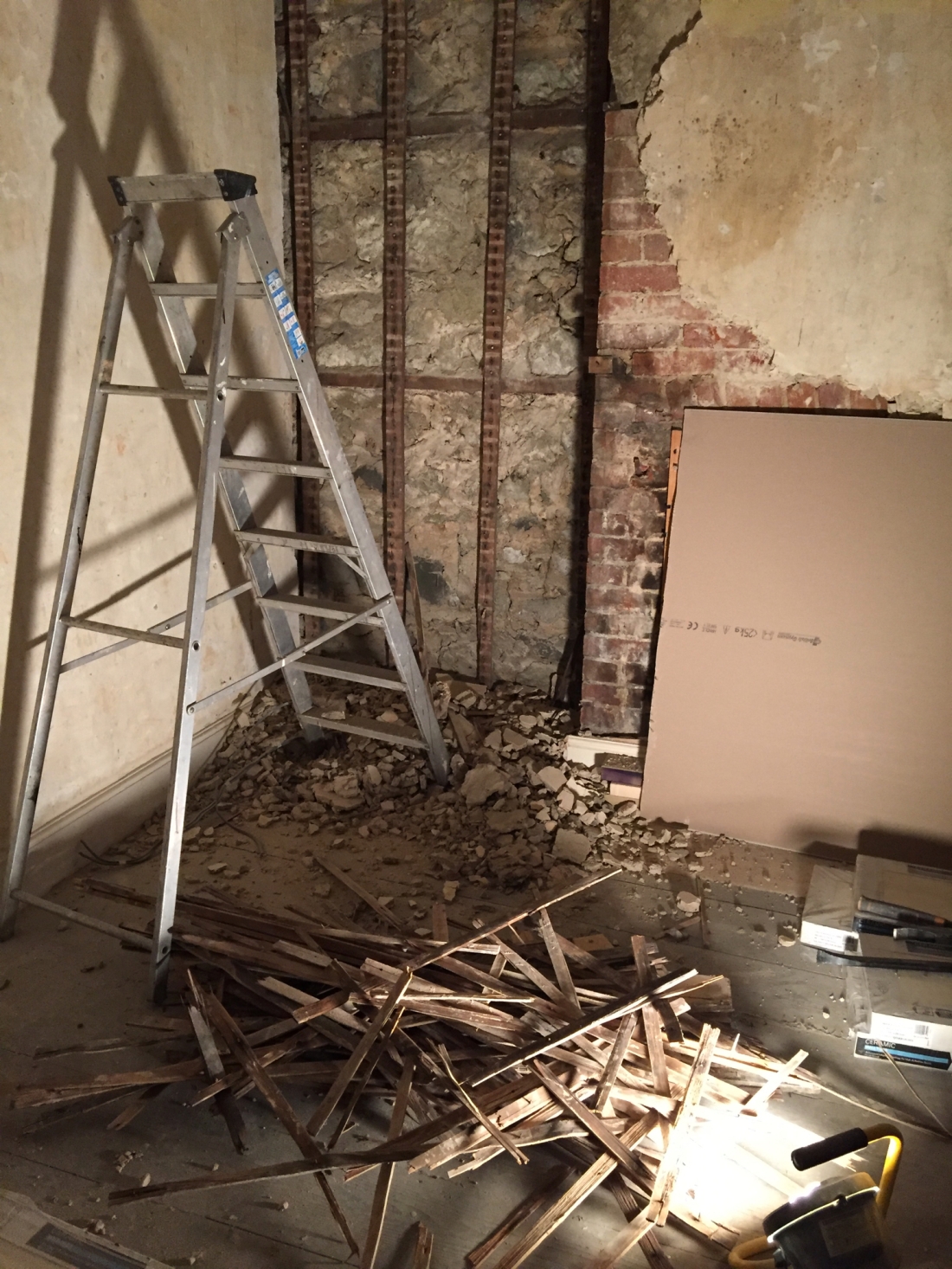 This is one of the smallest rooms in our Pile of Rubble, but eventually it would become the hub for the electrics, stop cock and the entire Internet network that we had installed throughout the house. As we had to remove the plaster from all walls, we ran cables throughout the house before replacing the plaster. As a result all rooms have a network point, and we have been able to put a fast and secure network into the annexe, linked to our main hub, which is located in the small from room. The only issue during the build, was the huge amount a cabling which all ended up on the floor of the “Room of Doom”

Once we got started on our little Room of Doom, things came together very quickly. The plaster dried in two days, and the Short One managed to paint the room over a 24hr period to enable the carpet to be fitted, whilst the paint was still wet! A quick second fix for electrics, some  strategically placed pieces of furniture, and within a week, we had a new small front room. Its specific use has yet to be agreed, it may become an office, or it may become a technology free, chill out room. Only time will tell.

The Tall One had been scouring internet selling sites, and online auction sites, to try and find a very old wood burner to fit into the fireplace in our new little room. The Small One would like all fireplaces to have wood burners, but the Tall One is a little worried about the amount of fire one house can take! After speaking to our Dream Team, it came to light that a family member was selling a particularly beautiful wood burner, which now has a new home in our Pile of Rubble.Once our new addition has been cleaned up, and the fireplace unblocked in the roof, we are sure this new addition will be a great attraction next Christmas.

With our Halloween, come Housewarming party over, and the promise of the first phase of new windows being fitted in November, we set about finishing the final large room at the front of the house. this room had been used to store all of our furniture and around 50 boxes throughout our little journey with our Pile of Rubble. All our bathroom furniture had been stored in there, at one time there were three baths, three showers and  two sofas, as well as all of our worldly belongings. Now after almost a year, it was time to turn it into a usable space, the only problem we faced, was where to start……….

The Short One learnt that, Lathe and Plaster, crumbles very quickly, when a little bit wet and held together with wood chip. Whilst taking chunks out of the walls was a bit drastic, it did make removing the wood chip a whole lot easier. Well thats what the Short One told the Tall One, and thankfully it was easily fixed.

After a quick repair of the main wall, and plastering the ceiling and the new wall which we needed to build, between the kitchen and the main room, it was onward with the painting. Our Pile of Rubble has been a bit like painting the Forth Bridge. Every room, walls and ceiling, had to have the wood chip removed and most rooms also needed re plastering, due to the stitching guys needing to remove everything taking it back to the original stone. As a result, every wall and ceiling has been stripped and repainted. And so the final room started to come to life. 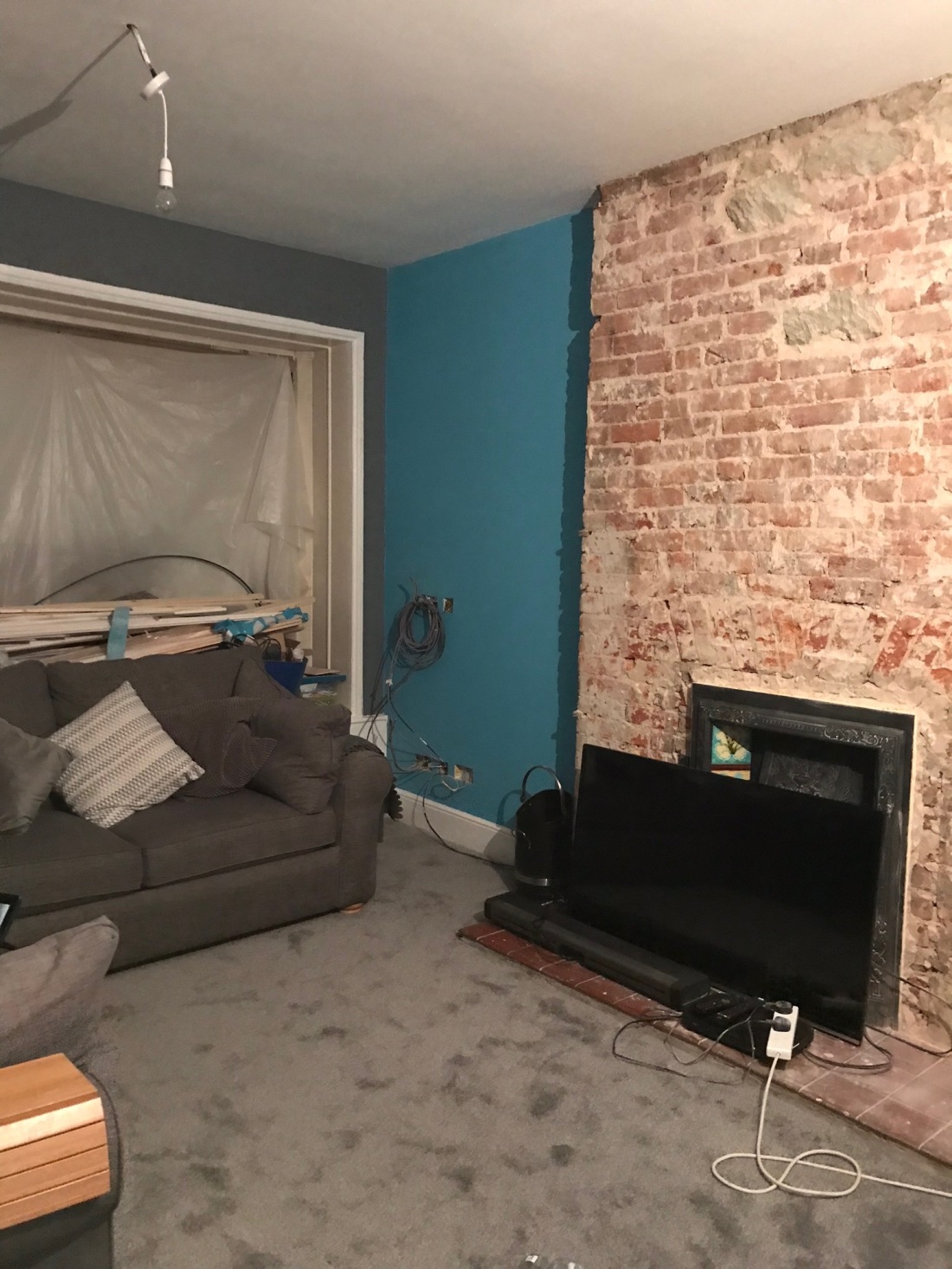 Our sofa had spent almost a year on its side, either in the Room of Doom, or in storage in two different storage facilities. The Tall One spent at least 48hrs laying on the sofa when it finally made it into the almost finished room, and its final resting place in our Pile of Rubble. After two weeks of painting, laying carpet and cleaning, our final room was finished enough to add candles a few personal items and a Christmas tree. 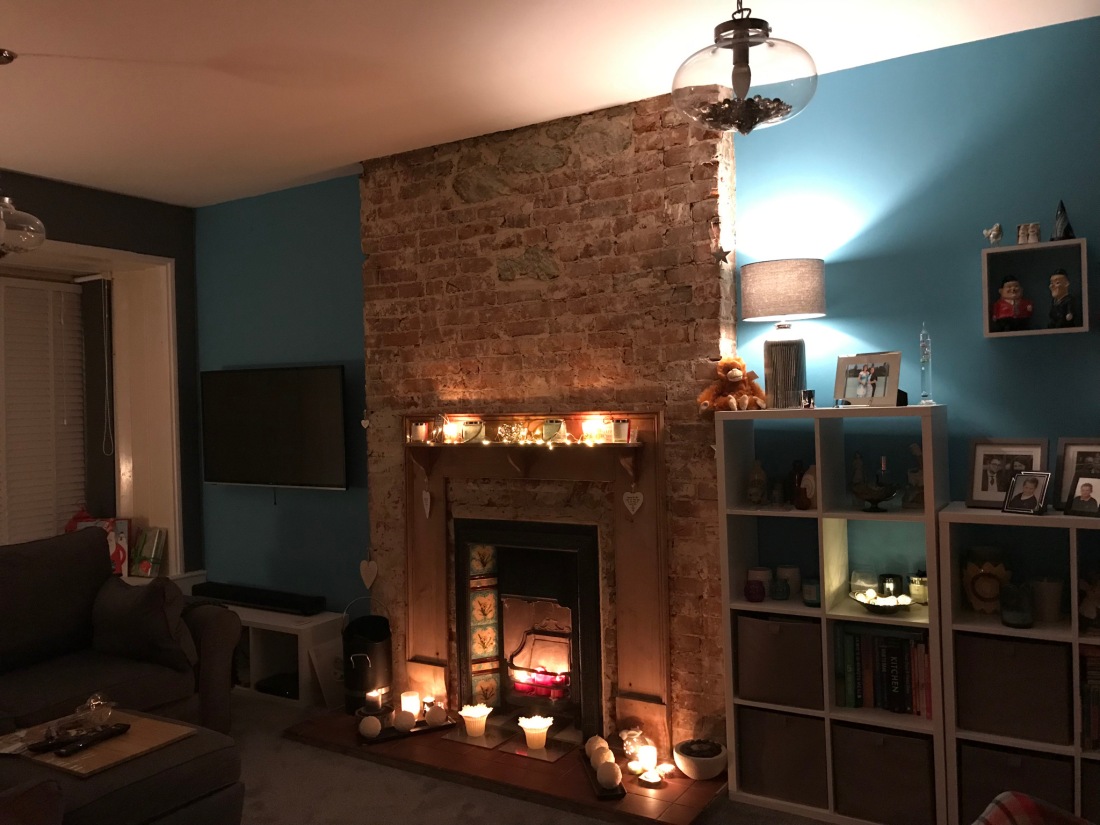 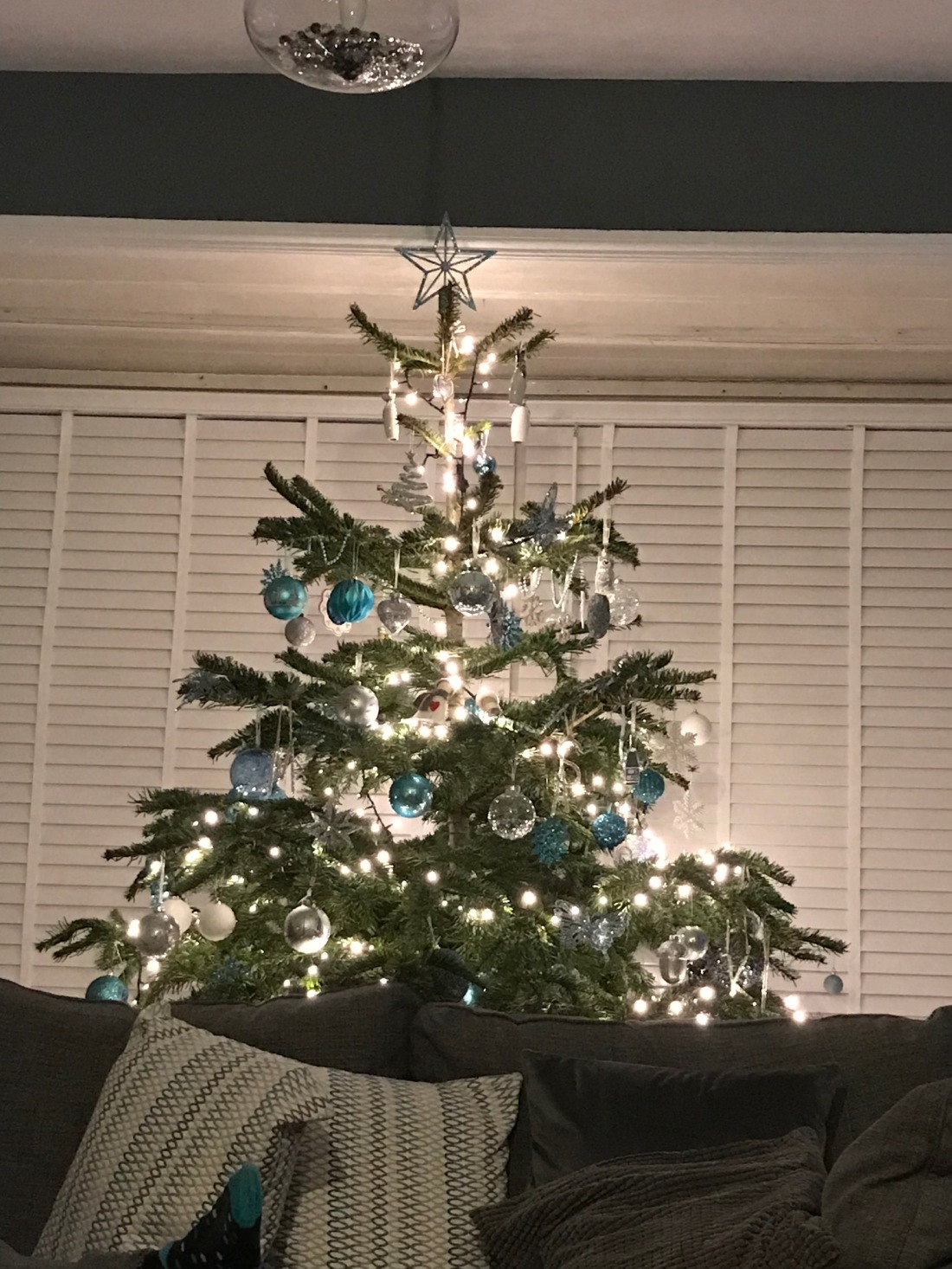 The only other thing that happened in our Pile of Rubble in late November was the removal of our old windows, these had been in situ since 1834, and replaced with bespoke wooden sash windows, lovingly made by a local craftsman. Each window is a different size, each box which the sash window fits in is a different size and all the old wood needs to be removed from the house piece by piece. 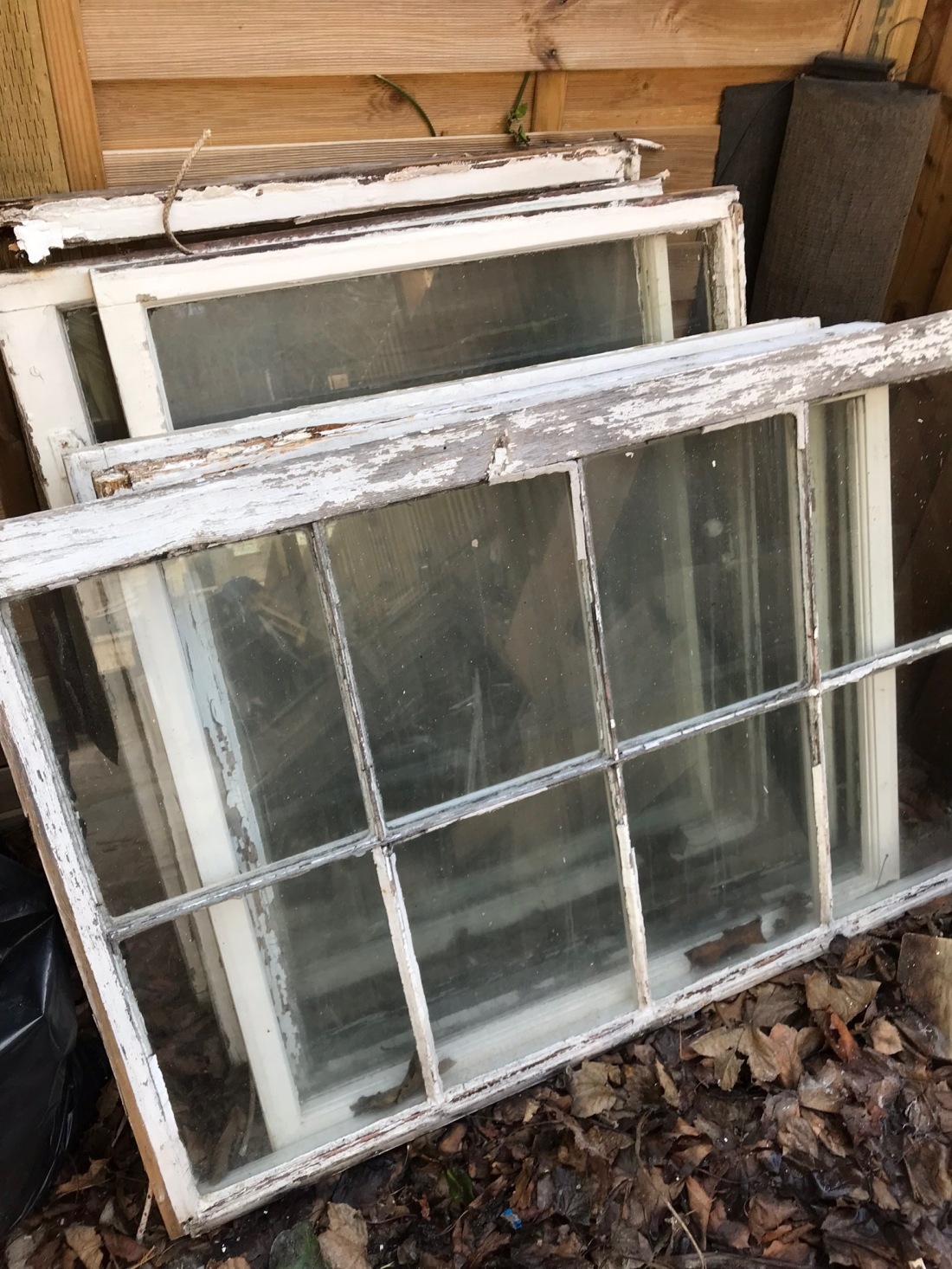 Once removed, our Pile of Rubble spent a few days without windows…………..

The view from our Pile of Rubble without windows is amazing, especially in late November. 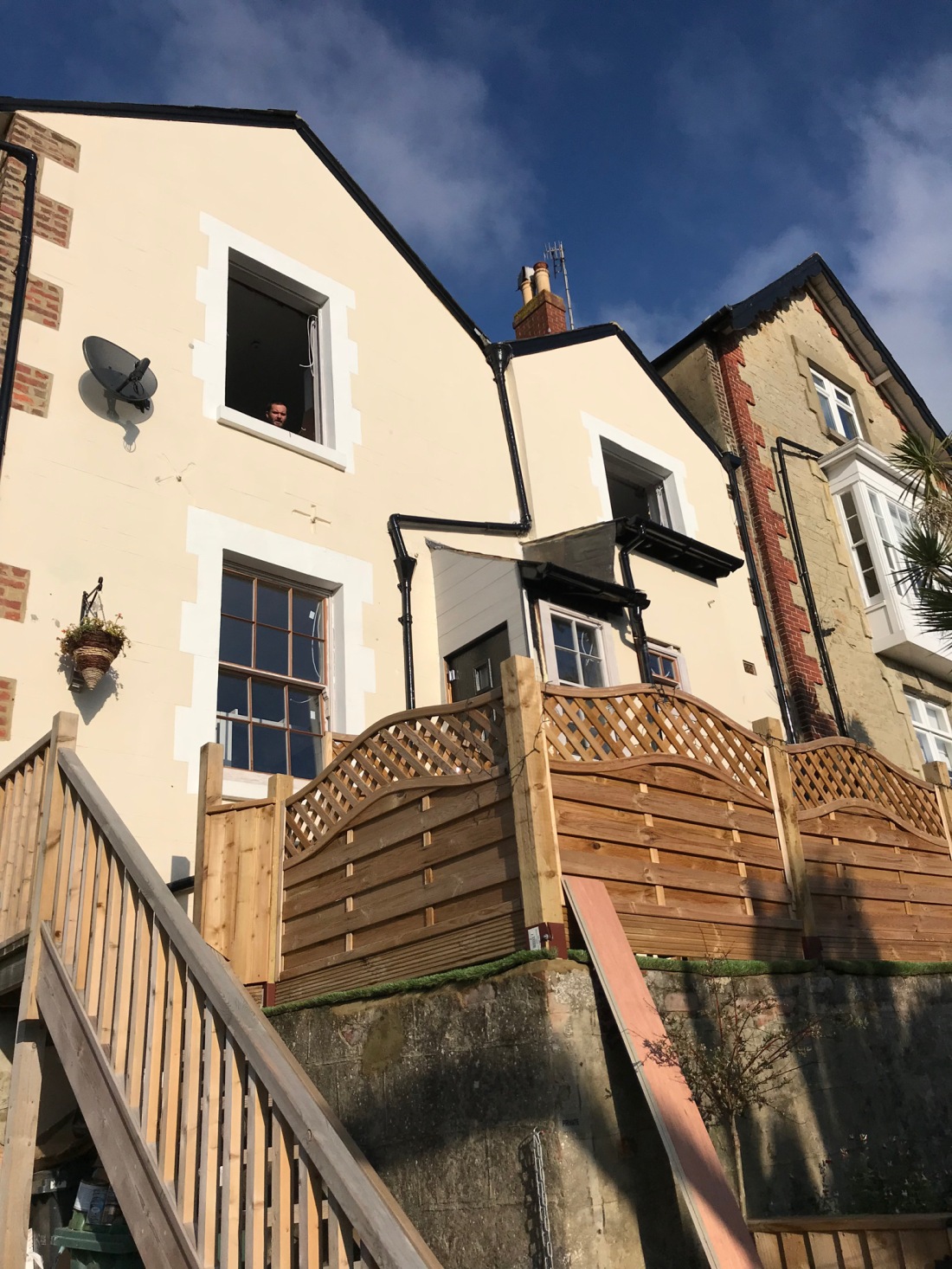 With all but the front windows replaced. The Tall One and The Short One are still waiting for the front window to be completed. We were finally ready to celebrate our first Christmas in our Pile of Rubble.

Winter in our Pile of Rubble has been fun, however we then began to look forward to the spring, and our next big adventure, when the Tall One and the Short One legally become one. Look out for our next blog which will be all about our newest adventure.

View all posts by twowomenandapileofrubble

2 thoughts on “Winter is not a Season, it’s a Celebration”