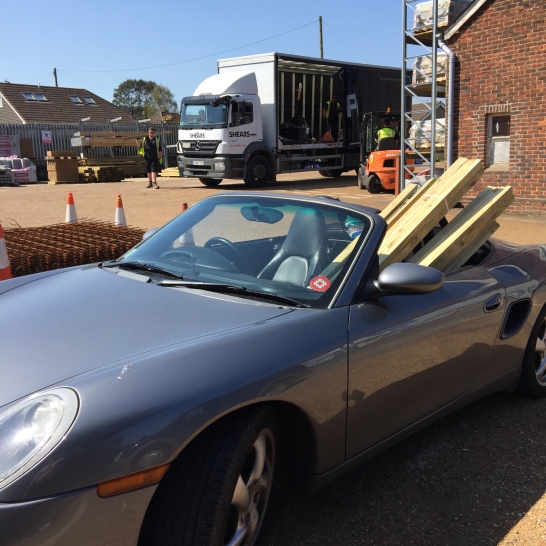 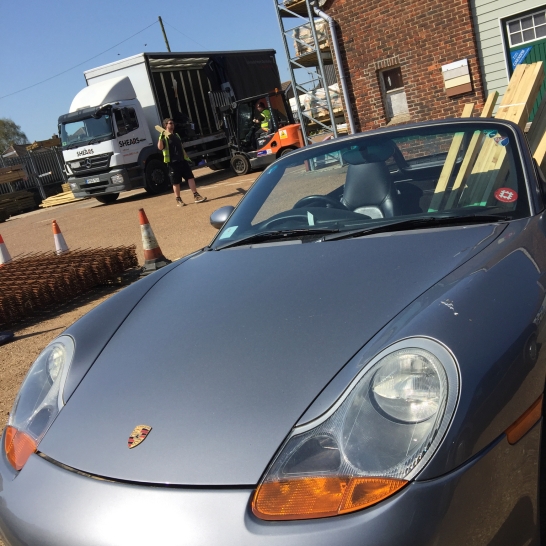 With our planning application expiry date looming and stitching started, we concentrated on getting a few basics back into the house, starting with a bathroom. This may seem like a simple task, we had after all removed five, however we discovered a few plumbing issues that needed to be sorted out before we could start to rebuild any of the new bathrooms.

We decided to start with the family bathroom on the top floor. Our en-suite will be the last bathroom to be fitted, as we have had to redesign the corner of our Pile of Rubble. This room has had the most movement and therefore requires the most stitching. Having removed three back to back shower rooms which had been divided up from the original bathroom, we were left with three waste pipes and three sets of individual hot and cold pipes to decipher, as well as three door openings. 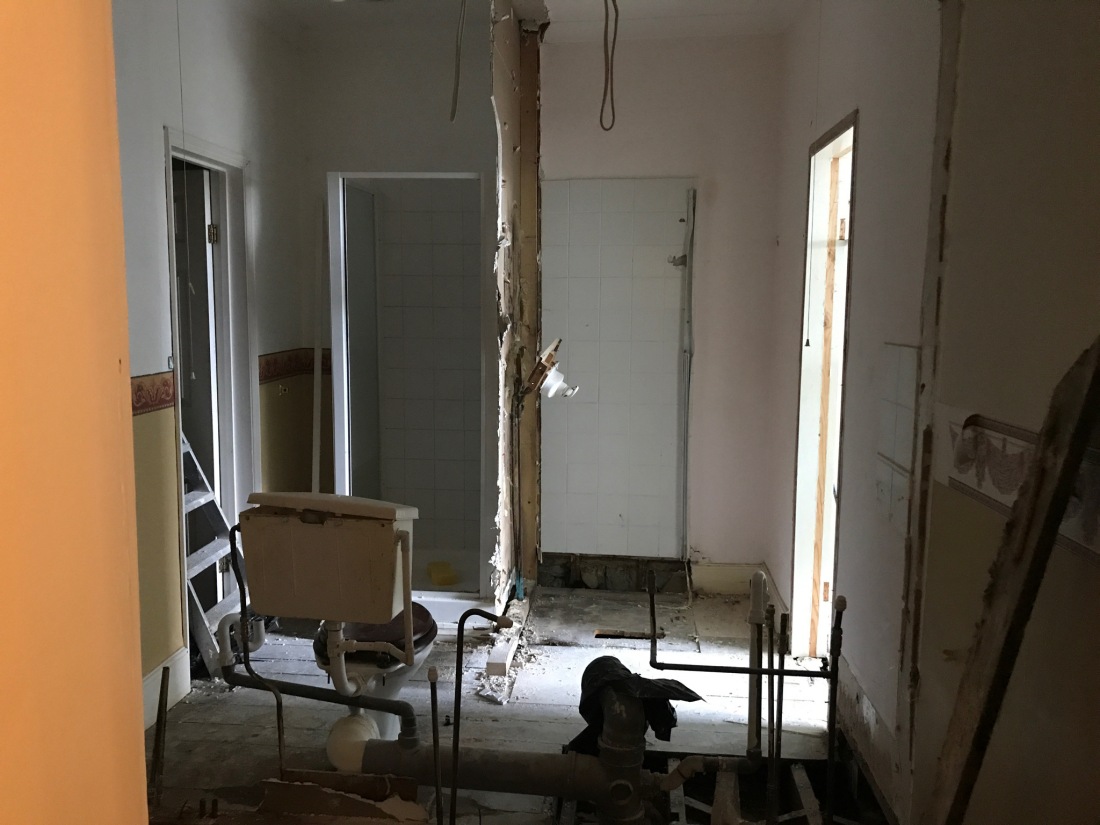 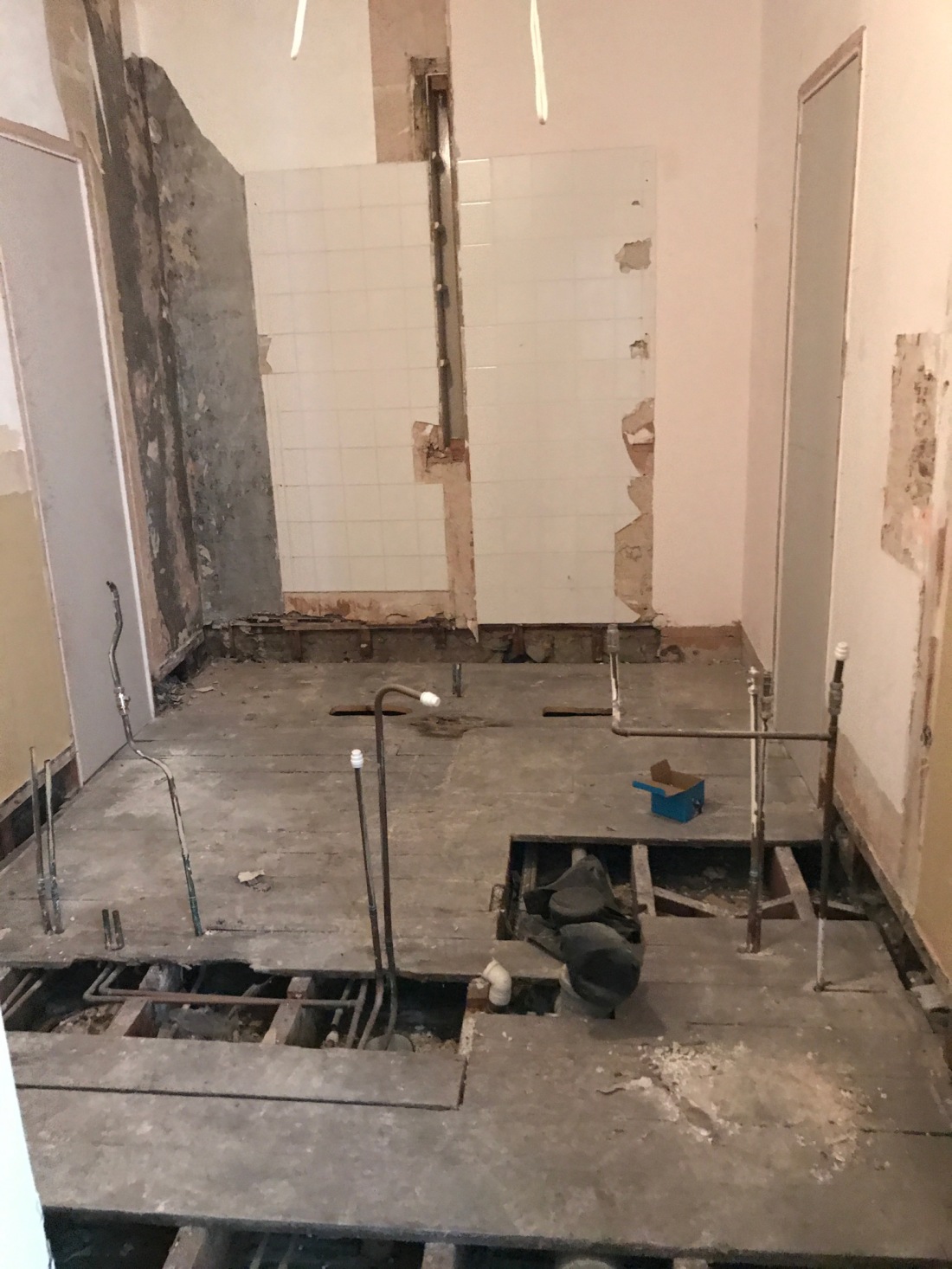 After removing one of the waste pipes we realised there had been a leak under the floorboards for quite some time. All of the pipes were blocked and the floor boards all needed to be replaced. We also needed to investigate the ceiling as it seemed to have a very distinctive wave running across the entire length of it. Once the false dividing walls  had been removed the ceiling looked even worse.

After removing the three extractor fans we quickly realised the ceiling was also false, thankfully this came down very quickly, but revealed an interesting addition to our Pile of Rubble. Before we submitted our planning application we had a historical statement written for our Pile of Rubble, and during this process we discovered that the Georgians used light tunnels to bring in natural light to a room through the roof. We believed this had been removed from our Pile of Rubble long before we bought it, and had decided to look into this further, later into our project. However our Pile of Rubble had other ideas and hidden in the original ceiling we found the frame of a Georgian light tunnel, as well as yet another fan and some old cables. The glass had been replaced with plastic sheets some years before, and the roof has over time been replaced with slates, but we can with some confidence say the original room would have had a light tunnel.

We debated with our Dream Team, the merits of keeping the light tunnel in the middle of the bathroom, but as it no longer gave us any light, it was in the loft, and was directly over the bath, the decision was made to overboard the bathroom ceiling.

With the ceiling sorted out we turned our attention to the plumbing. The main issue was with the waste pipe. Having removed the leaky pipe and its contents, we were left with one main pipe. We had designed the bathroom without thinking about the main waste pipe, big mistake. We have now learnt that this is a major factor when designing a bathroom. The main waste pipe is rather large, and cannot go through a ceiling joist, unless of course you are happy for the ceiling below to fall down. The waste pipe has to go between the joists, and another important factor to consider is where it goes out of the house. Now our Pile of Rubble is a listed property, and as such we can’t just knock a hole in the wall and run a waste pipe down the outside of the property. The main drains are all on one side of the property and all the main waste pipes feed into them. The family bathroom waste pipe also has to feed into this system, as well as connecting onto an existing down pipe outside of the house. The problem with this, is that the family bathroom is on the opposite side of the house to the main drains, and the downpipes. In order for the waste to leave the family bathroom, we needed to connect the toilet, bath and shower into the waste pipe running across the house. This required a complete re-design of the family bathroom, allowing for a straight connection from the toilet onto the main waste pipe. Hopefully we now have all the correct pipes, in the correct places with no leaks. 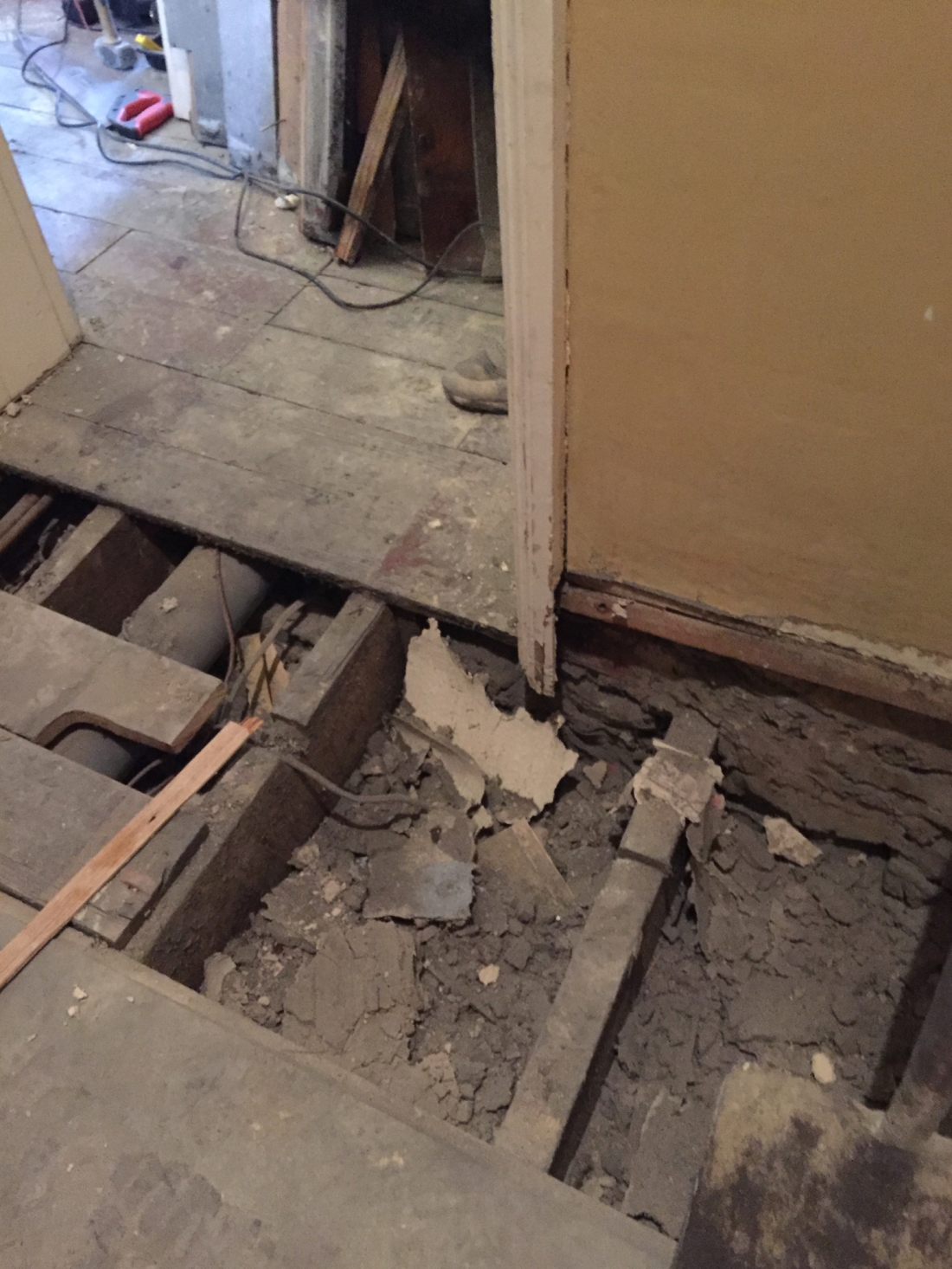 We have learnt very quickly that there is a certain order in which things have to be done when renovating a Grade II listed property. We could go no further with the family bathroom, as we needed to wait for the plumbers to first fix the new internal pipes, and connect the new waste pipe onto the existing exterior waste pipe. So work started on over boarding the new kitchen, hallway and dining room ceilings.

For this we needed a large quantity of batons, plasterboard and two different types of screws. Wood screws and plasterboard screws. As we are now on first name terms with Jewsons in Sandown, orders were placed and deliveries made. However our Pile of Rubble seems to eat materials, and deliveries are very frequent. Over boarding requires batons to be screwed to the original ceiling and plasterboard screwed onto the new batons. This creates a level surface for the new plaster and strengthens the walls and ceilings. 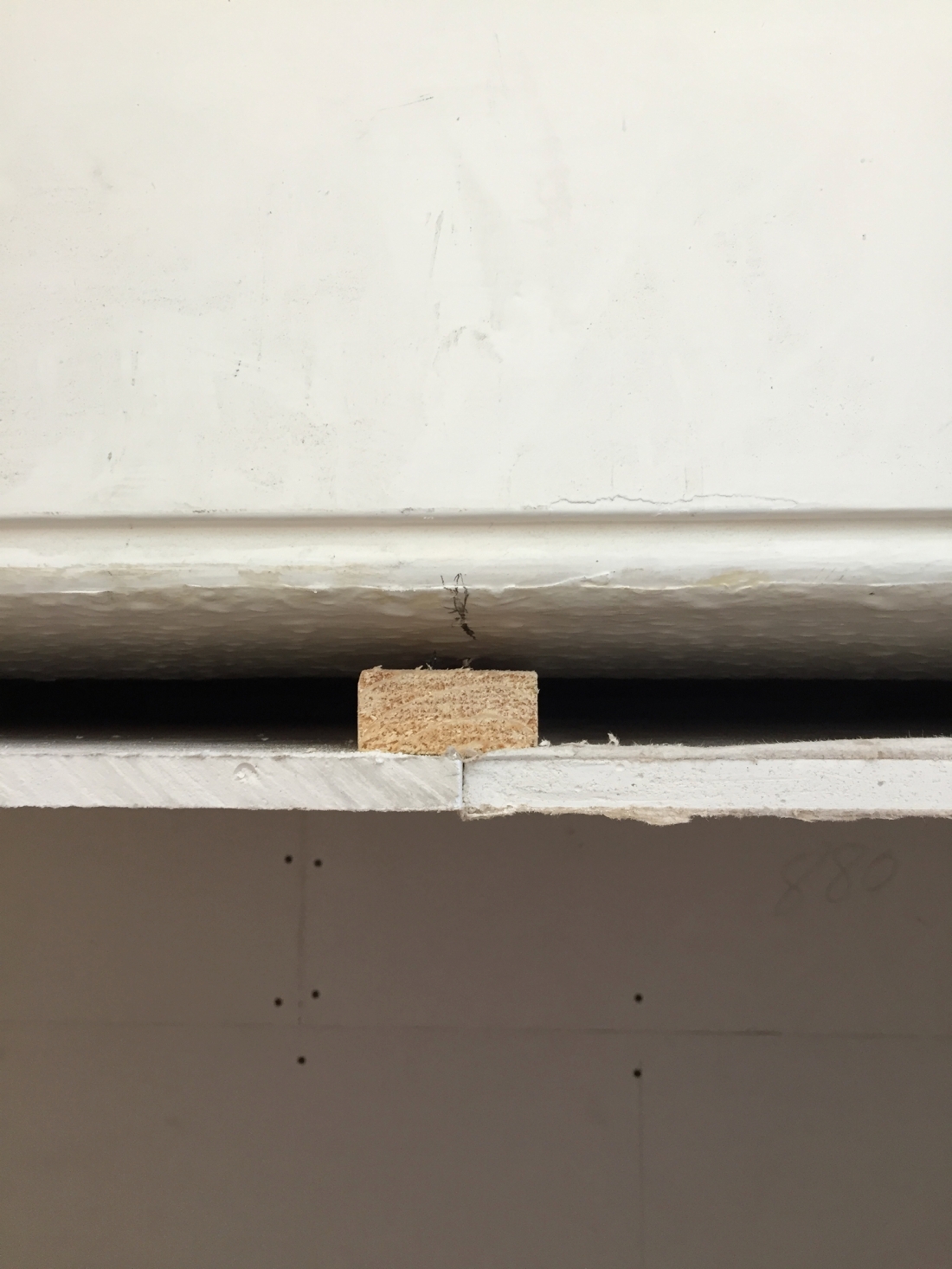 Our Dream team work very fast, and one Friday after completing the hallway, they decided to get the first floor over boarding finished before packing up for the weekend. The Tall One was not at The Pile of Rubble on this particular day, and the Short One was flying solo. This created a very small issue when our dream team ran out of batons and screws. The Short One has a very small classic car, unlike the Tall One, who has a very sensible Renault (which is great for picking up supplies on a Friday afternoon). The dream team and the Short One measured the small classic car, and decided between them that the 12, 6ft batons and two boxes of screws would easily fit in. The road from Ventnor to Sandown is relatively straight, and as it was a nice day, with the roof down the Short One could easily pick up the supplies needed to finish the job.

The lovely man in Jewsons however thought that this was not such a great idea, and after  placing one 6ft baton in the Short ones car, decided that the batons needed to be cut in half. This seemed an easy task, how difficult could it be to get 24, 3ft batons and two boxes of screws into a Porsche…….. 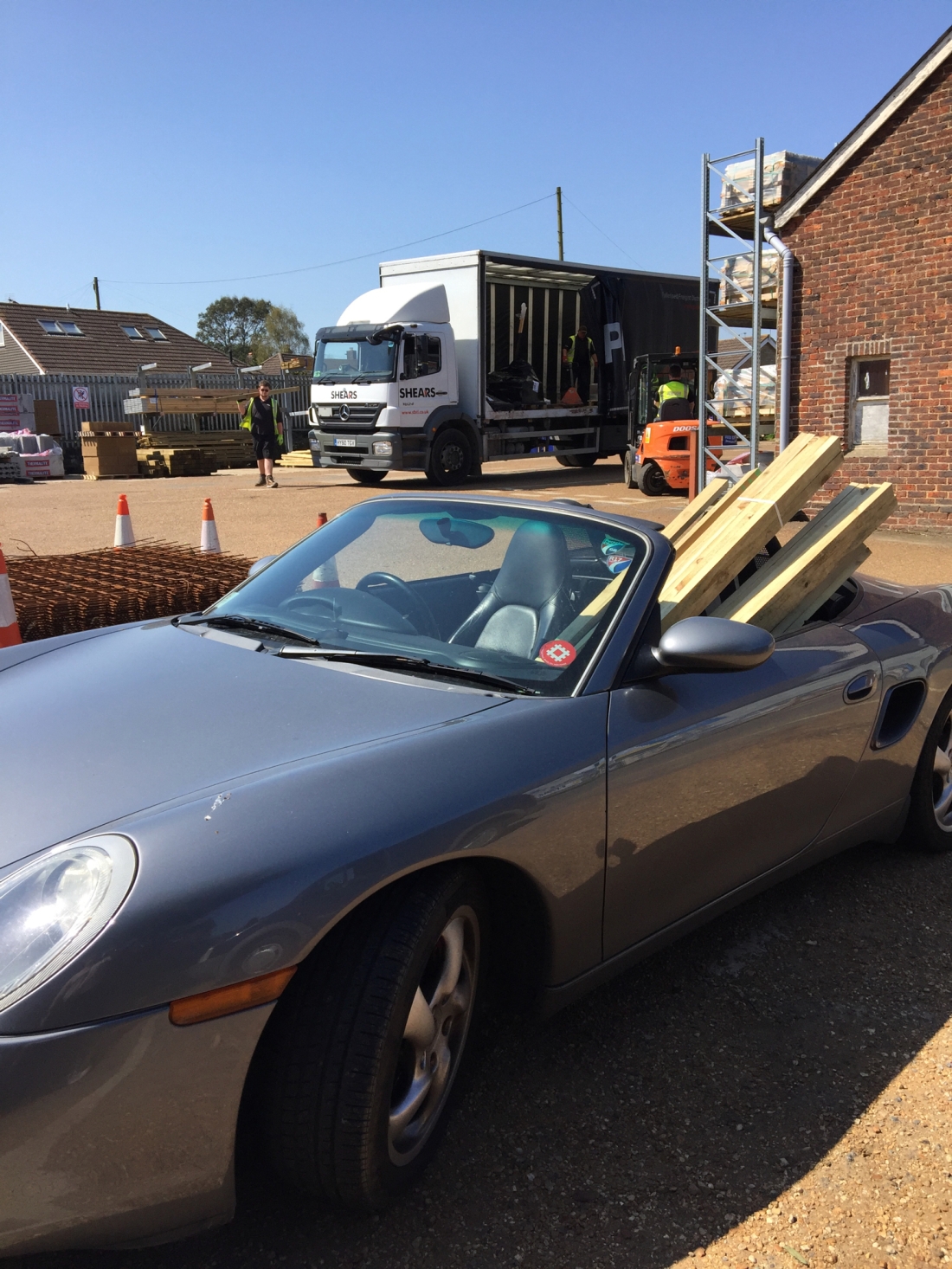 In actual fact this proved to be the most successful part of the trip. With the sun shining and the roof down, having safely secured the newly cut batons into the passenger side of the Porsche, the drive along the coast from Sandown to Ventnor was uneventful. Arriving back at our Pile of Rubble, the Dream Team spotted a fatal error in our Friday afternoon plan. The Short One had picked up the wrong screws. In order to secure the batons to the ceiling, the Dream Team needed wood screws. The Short One had picked up plasterboard screws, that is why she needs the Taller One to keep an eye on things ; ) So after unloading the materials, and without the right screws, work stopped for the afternoon in our Pile of Rubble. As the Shorter One was in charge she decided there was only one place to be on a sunny, Friday afternoon and took the Dream Team to the local watering hole for a much needed cold beverage. With Fridays staff meeting well under way, we discussed the order of play for the following week…….

View all posts by twowomenandapileofrubble